References – An example of my work 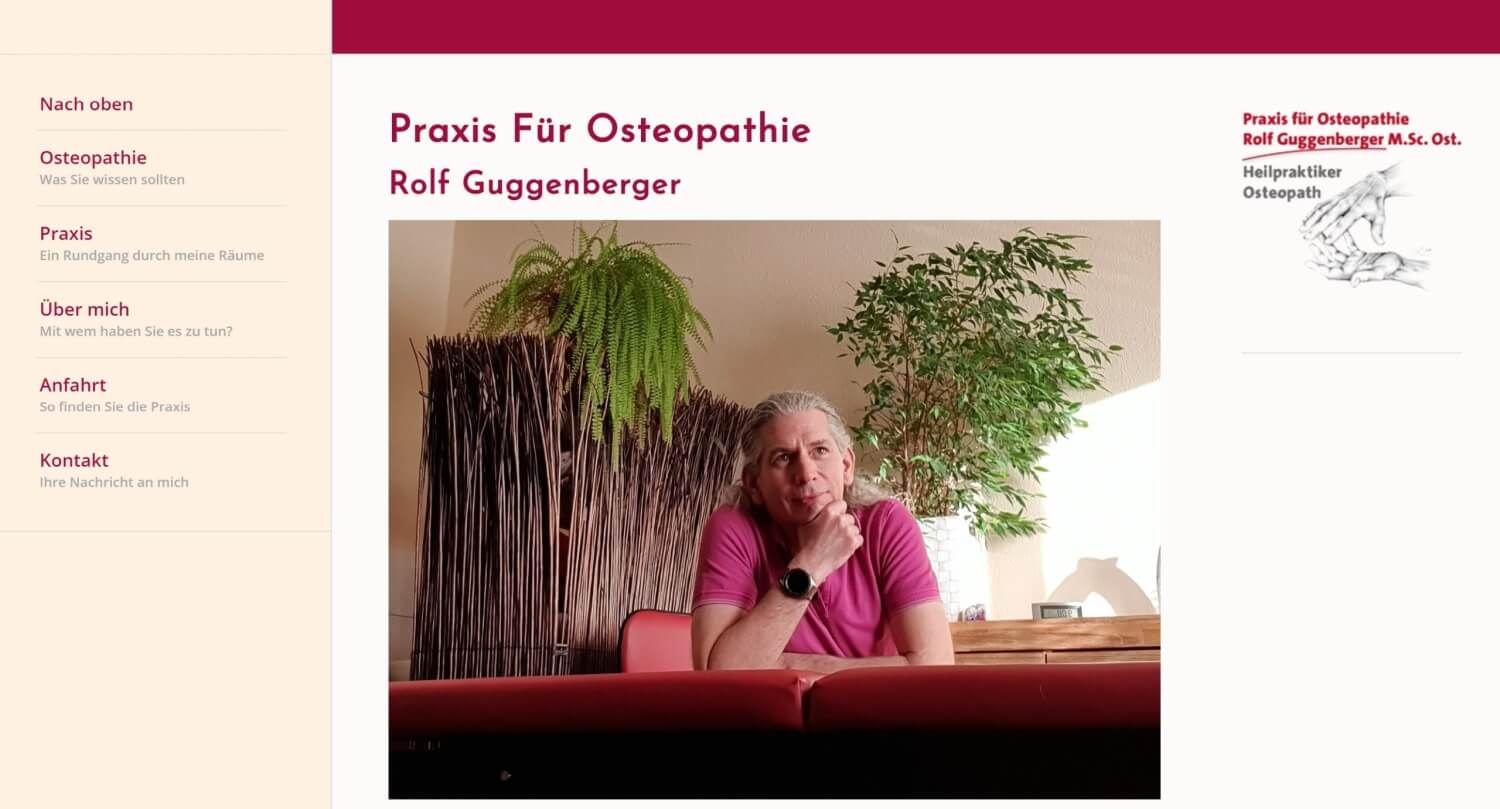 In January 2020 Rolf Guggenberger, owner of the Practice for Osteopathy Guggenberger in Vöhringen, asked me to relaunch his existing website.

The existing website was eight years old and not optimized for small displays like smartphones and tablets. But this is becoming more and more important, as more and more people access the internet mainly via smartphone.

It was important to Rolf Guggenberger that the colors and the general “look and feel” of his existing website were preserved. Visitors should immediately recognize that this is the familiar website in a modernized guise.
Another requirement of Mr. Guggenberger was that he wanted to be able to make minor changes to the website himself – for example, to set a notice of absence when he is at a training course. This was hardly possible with the old website, as it had been created conventionally with HTML and CSS. As a rule, the owner of a website has little or no knowledge of these techniques.
Also for this reason I decided to realize the project with the system WordPress. This allows even laymen to make changes to the website without any programming knowledge.

The colors of the former website I took over one to one. Important for Rolf Guggenberger was the bar at the top of the picture in “Guggenberger-Red”, which is a characteristic recognition feature.

Rolf Guggenberger and I decided that the menu should be on the left side of the website. This should also serve the recognition effect, since this was also the case with the old website.
In the mobile version the menu is realized by a so-called “hamburger menu” (three horizontal lines on top of each other). The menu itself then appears in a transparent, dark smokeglass-like design.

The start page is designed as a “one-pager”.
For example, if you click on the menu item “About me”, the page scrolls down smoothly.
Pictures are faded in gently.
The individual sections of the page are highlighted with the graphic representation of a water lily, which remains fixed when scrolling.

Rolf Guggenberger initially received two different design proposals for his project from me.
After the basic decision for one of the designs was made, the design was refined and optimized bit by bit. Mr. Guggenberger and I were in constant contact during this process.

Right from the start, the new website was designed to comply with the GDPR regulations.
Furthermore, I attached great importance to search engine optimization from the beginning.
Also the submission of the so-called sitemap to Google was done by me.

Hosting – Everything from one source

Rolf Guggenberger has decided to have the new website hosted by me.
Therefore I took over all the moving formalities and the domain osteopathie-guggenberger.de moved from the previous service provider to me within a few hours.
Mr. Guggenberger has decided to use my offer “managed hosting”. This means that all maintenance tasks such as regular updates (WordPress, PHP, database etc.), weekly backups at a spatially separated location as well as monitoring the security of the website are taken over by me.

Two weeks after the request the new website went online.
Rolf Guggenberger can now devote himself fully to his great passion: caring for his patients.

Back
Scroll to top